St Patrick is the patron saint of Ireland and has become a big part of Irish heritage.

But he wasn’t Irish. And he wasn’t called ‘Patrick’.

NAME GAME His real name was, we believe, Maewyn Succat, though Patri-ci-us was his Romanized name. Centuries later he became known as Patrick.

Most of what we know about Patrick’s life comes from the Confessio, a book he wrote towards the end of his life. He was born in Britain, probably in Scotland, to a well-off Christian family who were Roman citizens – his father was a Roman army officer.

THERE BE PIRATES IN THEM THERE SEAS When Patrick was aged 16, and living in Wales, one day a band of Irish pirates landed and kidnapped him, along with other boys. Then they sold him into slavery in Ireland. He was there for six years, imprisoned for a time, and then put to work as an animal herder. This was when he heard the voice of God in a dream. He was told by God how to escape on a ship to Britain, where he was eventually reunited with his family.

CALLING Later he went to France where he joined a monastery for around 12 years of religious training. Eventually he became a bishop. He had another dream – that the Irish were calling him back to Ireland to tell them about God. He arrived in Ireland around 433AD and began preaching. He converted thousands of Irish, who then built churches all over the country. The Celtic Druids weren’t too pleased. Patrick was captured more than once by them, but escaped each time. For 20 years he traveled throughout Ireland, establishing monasteries, churches and schools. He lived in poverty, by choice, and worked tirelessly.

Patrick died on March 17, in the year – we think – 461AD. He died in Saul – the town where he had built his first church in Ireland.

A LEGACY OF LEGENDS By the end of the 7th century Patrick had become a legendary figure – there are many legends associated with St Patrick. It is said that he used the three-leafed shamrock to explain the concept of the Trinity – the combination of Father, Son, and the Holy Spirit. So we have the shamrock as an Irish symbol to this day.

PRAY & PARTY For centuries the Irish have observed the day of Saint Patrick’s death as a religious holiday, traditionally attending church in the morning and celebrating with food and drink in the afternoon. Some cities around the world hold St. Patrick’s Day parades. The first parade, though, didn’t take place in Ireland – any guesses where it did happen first? (*The answer is at the end.) 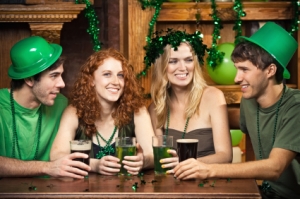 As the years went on, the parades became a show of unity and strength for Irish-American immigrants, who were, at best, marginalized and, at worst, persecuted by white protestant Americans. Now, in America, St Patrick’s Day is a celebration of Irish-American heritage.

St Patrick’s Day as we know it today is due to an international marketing campaign by the Irish government, which began in 1995 – as a way of driving up tourism and showing off Ireland’s charms to the rest of the world.

I’ll drink to that.

Click the roundel for more on A Chance Kill

This material was broadcast on my History Radio Show on 17 March, 2016